The mother of an Ivy League swimmer who competed against UPenn transgender athlete Lia Thomas is slamming the university for nominating her for the NCAA ‘Woman of the Year’ award, calling the move ‘humiliating and devastating.’

Kim Jones appeared on ‘Fox & Friends First’ on Monday where she expressed her outrage at the nomination. She accused the school of sending a message that ‘women don’t matter.’

‘[The message is] they’re not even worthy of dignity and comfort in their locker rooms,’ Jones said. And this nomination is just the embodiment of that message. It’s really frustrating to understand where the current NCAA and Ivy League and especially Penn’s stance is on the value of women in modern society.’

Thomas, 22, was named as one of two students nominated for the National College Athletics’ Association’s Woman of the Year Award.

Jones, a former All-American tennis player whose daughter competed against Thomas, is the latest to come forward to speak out about their disappointment.

University of Kentucky swimmer and one of 2022’s NCAA Woman of the Year nominees Riley Gaines and tennis legend Martina Navratilova were among others who spoke out following Thomas’ nomination of the prestigious award. 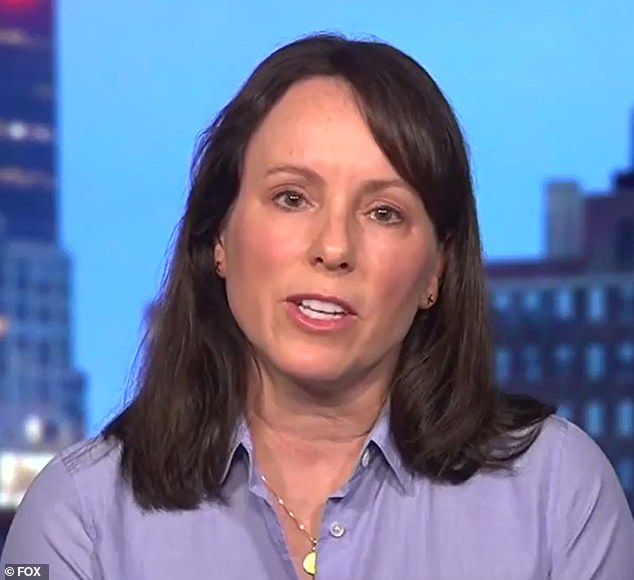 Kim Jones, mother of an Ivy League swimmer who competed against UPenn transgender athlete Lia Thomas, appeared on ‘Fox & Friends First’ and slammed the university for nominating Thomas for the NCAA ‘Woman of the Year’ award 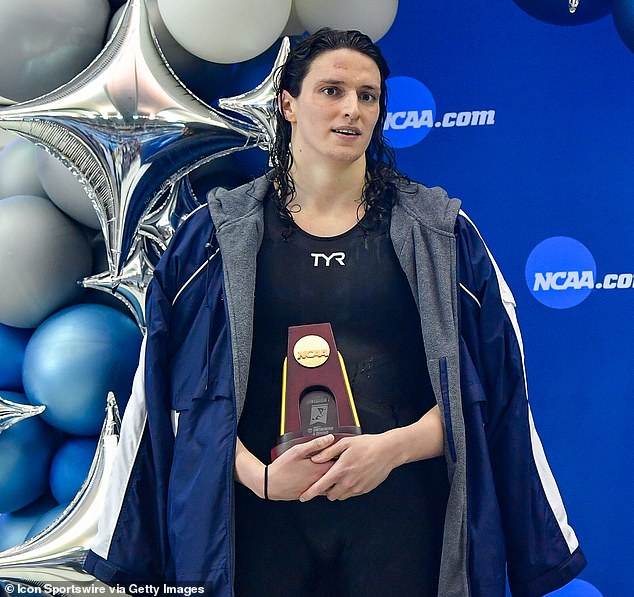 Thomas, 22, was named by UPenn as one of two students nominated for the National College Athletics’ Association’s Woman of the Year Award 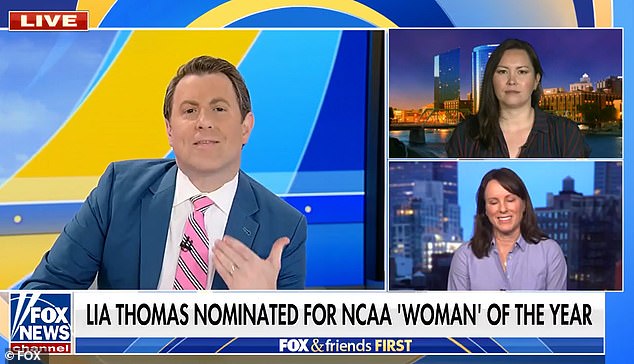 Marshi Smith, a former NCAA champion swimmer, co-founded ICONS, the Independent Council on Women’s Sports, joined Jones on Fox Monday and chimed in on the conversation saying that the ‘NCAA needs to acknowledge fundamental truths.’

“There is a biological difference between men and women,” she continued. ‘And if we can’t agree that that foundational truth is a reality, then how can we protect our girls and women?’

Jones added that college athletes spend countless hours training, which is ‘dismissed’ when biological males can compete against them with unfair physical advantages.

That’s what all that effort, all those hours, all that hard work and the journey that was supposed to be so empowering and fulfilling has been reduced to something that people think is a sideshow. It’s really frustrating,’ she said. 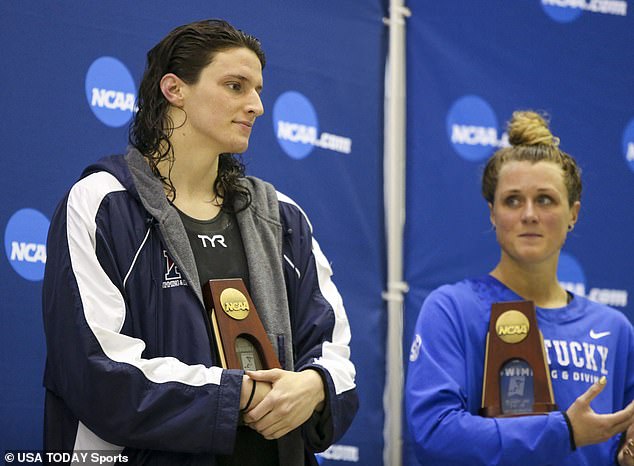 Riley Gaines (pictured right), University of Kentucky swimmer and one of 2022’s NCAA Woman of the Year nominees, is speaking out after the University of Pennsylvania nominated transgender swimmer Lia Thomas (pictured left) for the prestigious award 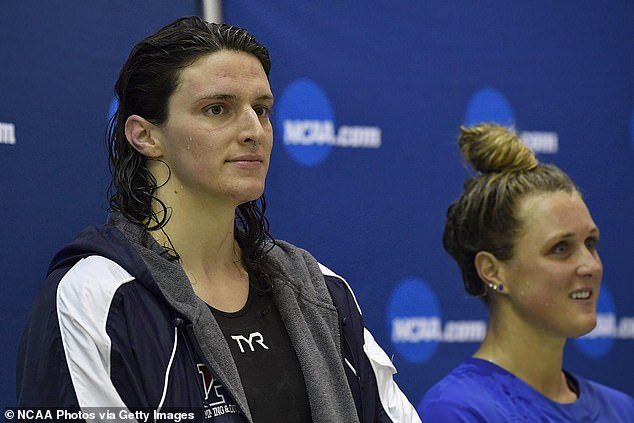 Gaines and Thomas famously tied for 5th place in the women’s 200-meter NCAA championships in March, but as there was only one trophy, Gaines was told by organizers that the trophy would be given to Thomas, while hers would be mailed at a later time. 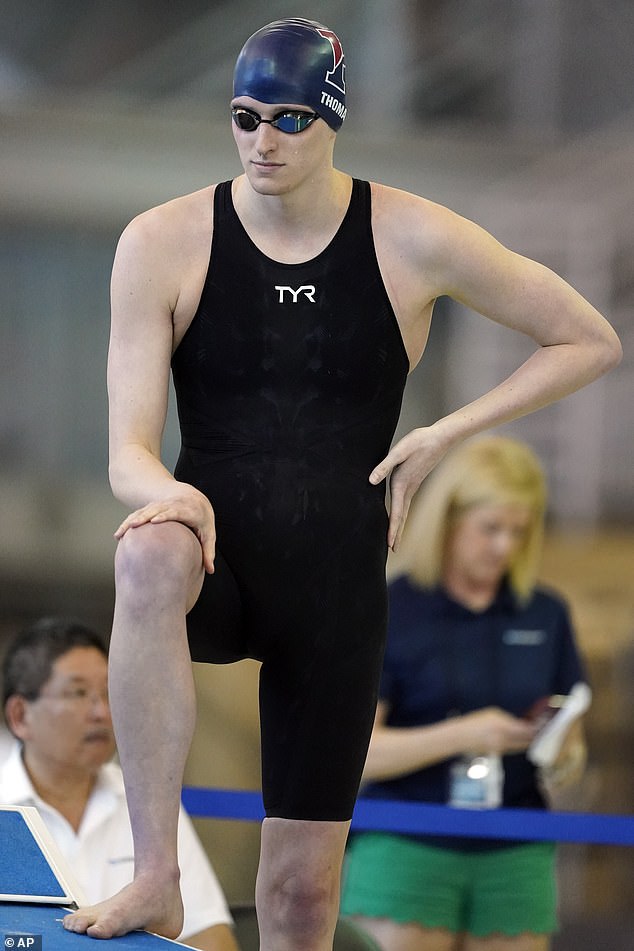 Thomas, who won the 500-yard freestyle final in March 2022, is the first known transgender woman to win an NCAA swimming championship

Kentucky swimmer Riley Gaines tweeted that the nomination is ‘another slap in the face to women’ and that the ‘NCAA has made this award worthless.’

‘[T]his is yet another slap in the face to women. First a female national title and now nominated for the pinnacle award in collegiate athletics. The NCAA has made this award worthless,’ Gaines wrote.

Gaines and Thomas famously tied for fifth place in the women’s 200-meter NCAA championships in March, but as there was only one trophy, Gaines was told by the event’s organizers that the trophy would be given to Thomas, while hers would be mailed at a later time.

Gaines was not the only female athlete to tweet her outrage.

Navratilova, who has won the most major titles in women’s tennis in the Open Era, also took to Twitter to deride the nomination.

‘Not enough fabulous biological female athletes, NCAA?!? What is wrong with you?!!!!!!!?’ she tweeted.

Other athletes and commentators also chimed in.

Prior to appearing on Fox Monday, former NCAA champion swimmer Marshi Smith tweeted. ‘How many women’s awards are we willing to surrender? The Ivy League choosing a male as their nominee is doubling down on their anti-woman campaign.’

Smith suggested Gaines, a swimmer at the University of Kentucky who competed against Thomas, should win the award. 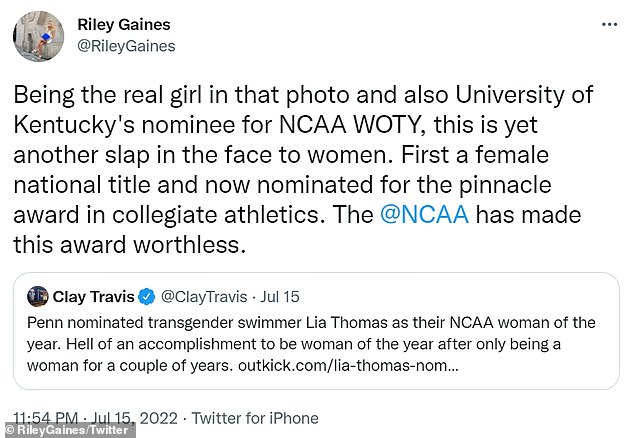 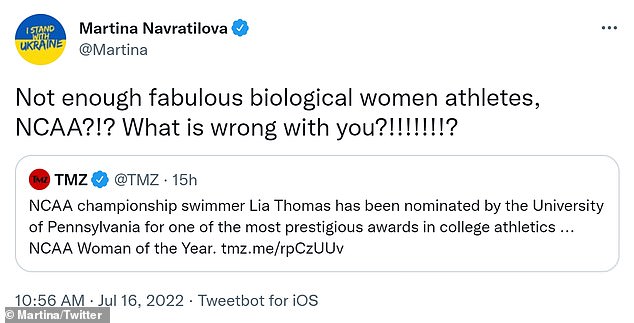 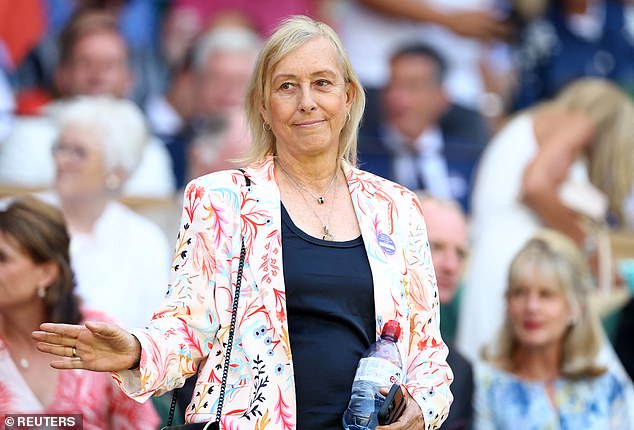 Physics teacher Debbie Hayton, who is herself transgender, was similarly critical. “I urge Thomas to do what is right and respectfully decline the nomination, and possibly generate some respect.”

Commentators away from the world of sports also weighed in, with podcast host Allie Beth Stuckey writing. NCAA dubs ‘Lia’ Thomas ‘woman’ of the year. You have the laugh at the audacity of our current dystopia. Rest assured that the harder they push this stuff, the harder the pendulum will swing back. And it will swing back—sooner than you think.’

The University of Pennsylvania’s other nominee is Russian tennis player Luliia Bryzgalova.

Each school is allowed two nominations as long as one of the athletes is an international student or a person of color and both must be graduating. The winner will be announced at an NCAA event in San Antonio, Texas, in January 2023. 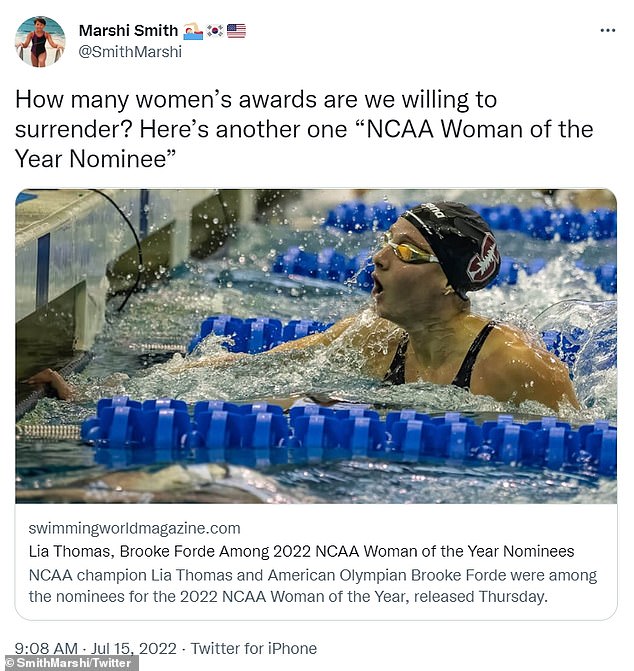 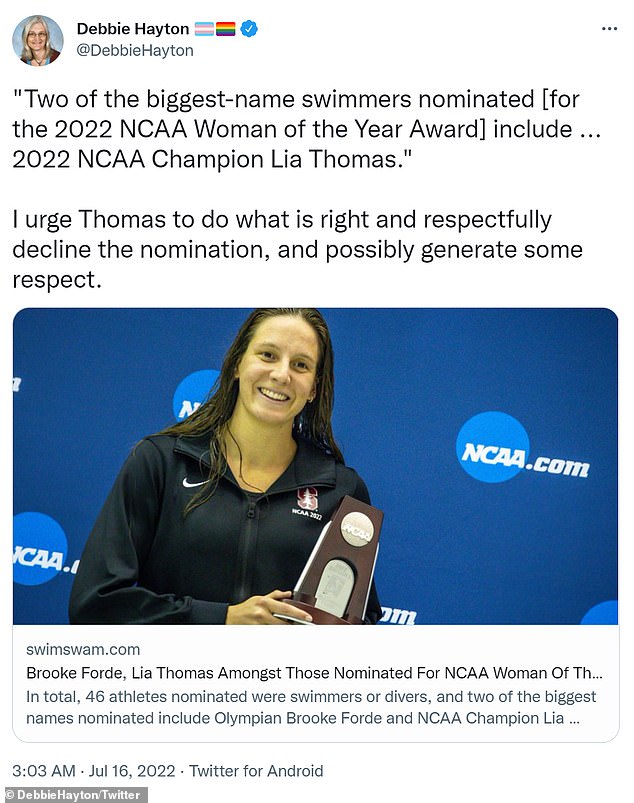 Thomas, 22, made headlines at the beginning of the swim season after parents and college swimming enthusiasts blanched at a transgender woman competing in women’s sports.

But UPenn has plowed on with its nomination of Thomas regardless, despite frequent condemnation from fellow athletes and their families over her success. 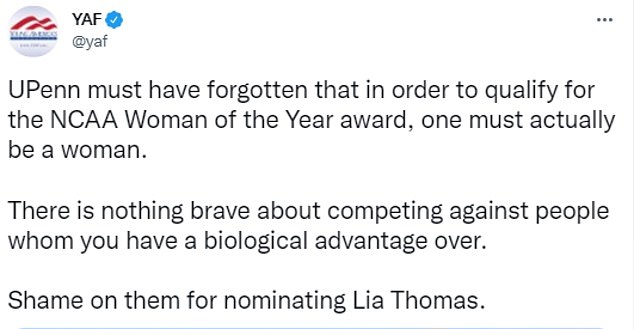 The school is being ‘ashamed’ for nominating her. A conservative college organization Young America’s Foundation wrote on Twitter that there is “nothing brave about competing against people whom you have a biological advantage over”.

“Shame on them for nominating Lia Thomas,” a conservative college organization Young America’s Foundation wrote on Twitter. UPenn must have forgotten that in order to qualify for the NCAA Woman of the Year award, one must actually be a woman.

The award was established in 1991 and ‘recognizes female student-athletes who have exhausted their eligibility and distinguished themselves in their community.’

Although Thomas placed high on the leaderboard throughout the swim season, she only won the 500-yard freestyle at the championships.

Analysis subsequently uncovered suggested that Thomas was deliberately suppressing her performance to avoid a clean sweep of wins that would have further inflamed allegations of unfairness.

Throughout the season, many called for Thomas’ removal from the team, including from some of her teammates.

UPenn swimmers were reportedly told by the college that ‘Lia’s swimming is a non-negotiable.’

‘They’ve made it pretty clear, if you speak up about it, your life will be over in some way, you’ll be blasted all over the internet as a ‘transphobe,’ … you’ll never be able to get a job,’ one of the girls anonymously told documentary maker Matt Walsh in June.

One anonymous student also said that the college was so determined to protect Lia because she helps them score points over other schools. Lia’s performance helped the team move seven places up the leaderboard from 27th in 2019 to 20th in 2021.

‘Lia obviously helps us do better. She is swimming really fast. Her performance helps the UPenn swim team. The feeling of winning doesn’t feel as good anymore because it feels tainted,’ she said.

Earlier this year, Thomas also expressed a desire to be an Olympian.

In an interview with Good Morning America, she admitted she is ‘no medical expert’ but she said some cisgender females have more testosterone, bigger hands and feet and are taller than their competitors – so why should she be banned when they aren’t.

“I don’t need anyone’s permission to be myself,” she said. ‘I intend to keep swimming… It’s been a goal of mine to swim at Olympic trials for a very long time, and I would love to see that through.’

She also said anyone who says she isn’t allowed to compete as a woman is transphobic, regardless of whether or not they support her right to transition.

‘You can’t go halfway and be like ‘I support trans people but only to a certain point. If you support transwomen and they’ve met all the NCAA requirements, I don’t know if you can say something like that. 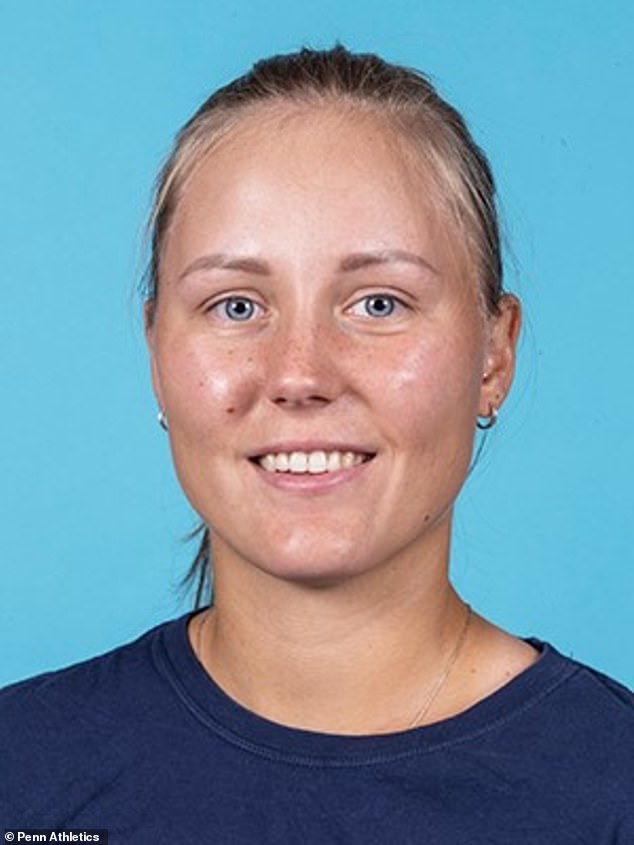 “Trans women are not a threat to women’s sports,” she said.

Athletes would have to have transitioned before the age of 12 to compete.

FINA also proposed an ‘open’ section for transgender athletes to compete in.

Serena Williams announces she is ‘evolving away from tennis’